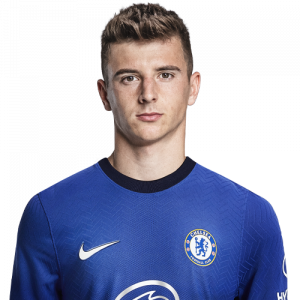 Mason Tony Mount (born 10 January 1999) is an English professional footballer who plays as an attacking or central midfielder for Premier League club Chelsea and the England national team.

Mount joined Chelsea at the age of six, and began his senior career on loan to Vitesse in the Dutch Eredivisie and Derby County in the Championship before making his Chelsea debut in 2019.

Mount was born in Portsmouth, Hampshire. His father Tony was a player and manager at non-League level with local clubs such as Havant Town. He was playing under-6 football in local leagues as a four-year-old and spent one day a week training in the academies of Portsmouth, Southampton and Chelsea. Mount joined Chelsea at the age of six, in 2005. He made his under-18 debut as an under-15 during the 2013–14 season and added several more appearances in the following season. Mount went on to play for both under-18 and under-21 teams during the 2016–17 season, in which he scored 10 goals in 30 appearances. He signed a new four-year contract with Chelsea in July 2017.