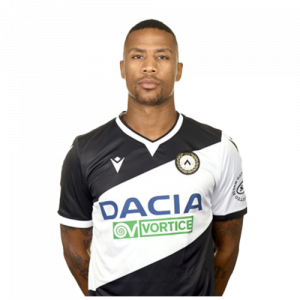 Marvin Romeo Kwasie Zeegelaar (born 12 August 1990) is a Dutch professional footballer who plays for Italian club Udinese Calcio as a left back or a left midfielder.

Portugal
In the summer of 2014, Zeegelaar signed a two-year contract with Rio Ave F.C. from the Portuguese Primeira Liga. He made his debut in the competition on 21 September, playing the second half of the 1–2 home defeat to F.C. Arouca. He finished his first season with 25 matches and one goal, helping to a final tenth position.

With only six months to go before he became a free agent, Rio Ave accepted Sporting CP’s bid of €400.000 in November 2015, and Zeegelaar penned a three-and-a-half-year deal which became effective in the following transfer window. In his only full season, he made 26 appearances across all competitions to help to a final third position, battling for position with Brazilian Jefferson Nascimento.

Watford
On 31 August 2017, Watford signed Zeegelaar on a four-year contract. He made his Premier League debut on 19 November, playing the full 90 minutes in a 2–0 home win over West Ham United.

Udinese
Zeegelaar joined Italian Serie A team Udinese Calcio on 10 January 2019, on a five-month loan. One year later, he agreed to a permanent deal running until 30 June 2022.