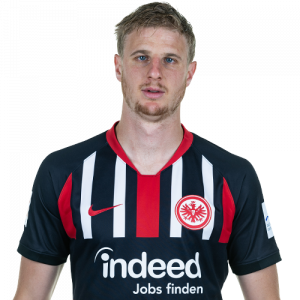 Martin Hinteregger (born 7 September 1992) is an Austrian professional footballer who plays as a centre back for Bundesliga club Eintracht Frankfurt.

Hinteregger playing for Frankfurt in 2019
On 31 August 2016, Hinteregger joined FC Augsburg on a two-year contract.

In January 2019, he was loaned to Eintracht Frankfurt from Augsburg. In July 2019, he was officially moved to the same club via buyout clause. In a game against Bayern Munich on 23 May 2020, Hinteregger scored two goals and an own goal.

International career
After being capped at various youth levels for Austria, Hinteregger made his debut for the Austria senior team in a 1–0 friendly win over the United States on 19 November 2013.

He represented the national team at 2016 UEFA Euro.