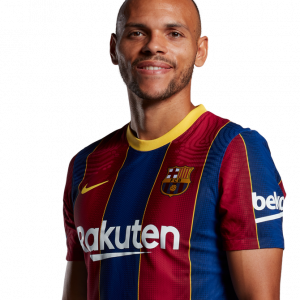 Martin Christensen Braithwaite (born 5 June 1991) is a footballer who plays for Spanish club Barcelona and the Denmark national team.

Mainly a forward, he can also play as a winger.

Barcelona
On 20 February 2020, Barcelona triggered Braithwaite’s release clause of €18 million and signed him on a four-and-a-half year contract. His release clause was set to €300 million. Barcelona were granted an emergency exception to sign Braithwaite outside of a transfer window because of the long-term injury of Ousmane Dembélé. Two days after signing, Braithwaite made his debut in a home match against Eibar, coming on as a substitute in the 72nd minute. He assisted the fourth and fifth goals in the 5–0 win, both off deflections. On 13 June 2020, Braithwaite scored his first goal for Barcelona following an assist by Lionel Messi in a 4–0 victory against RCD Mallorca.

On 24 November 2020, Braithwaite scored his first two Champions League goals in a 4–0 away win over Dynamo Kyiv, a match in which he also had an assist, in the 2020–21 season. On 2 December, he scored his third goal in the competition in the first half of the match against Ferencváros. On 3 March 2021, he scored the winning goal in a 3–0 win over Sevilla after extra time, to secure Barcelona a place in the 2021 Copa del Rey Final.