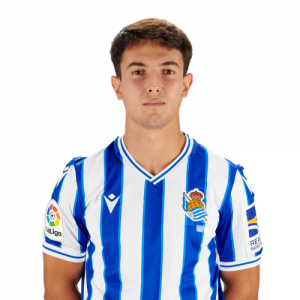 Martín Zubimendi Ibáñez (born 2 February 1999) is a Spanish professional footballer who plays as a midfielder for Real Sociedad and the Spain national team.

Born in San Sebastián, Gipuzkoa, Basque Country, Zubimendi joined Real Sociedad’s youth setup in 2011, aged 12. He made his senior debut with the C-team on 27 August 2016, playing the last seven minutes in a 0–0 Tercera División home draw against SCD Durango.

On 25 July 2018, Zubimendi renewed his contract until 2022, and was definitely promoted to the reserves in Segunda División B. The following 28 April, he made his first team – and La Liga – debut, coming on as a late substitute for Rubén Pardo in a 2–1 home win over Getafe CF.

On 24 July 2020, Zubimendi renewed his contract with the Txuri-urdin until 2025, being definitely promoted to the main squad.