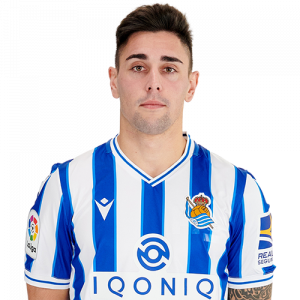 Martín Merquelanz Castellanos (born 12 June 1995) is a Spanish professional footballer who plays for Real Sociedad as a left winger.

Born in Irun, Gipuzkoa, Basque Country, Merquelanz joined Real Sociedad’s youth setup in 2012, from Antiguoko. He was promoted to the reserves on 23 June 2014, and made his senior debut on 31 August by coming on as a second-half substitute for Pablo Hervías in a 0–3 Segunda División B away loss against CD Tudelano.

Merquelanz scored his first senior goal on 20 September 2015, netting the second in a 5–0 away routing of CD Mensajero. Roughly one year later, he scored a hat-trick in a 4–0 home thrashing of Gernika Club, and finished the 2016–17 campaign with ten goals in 36 matches.

On 14 August 2018, Merquelanz was definitely promoted to the main squad in La Liga. He made his debut in the category on 31 August, replacing Asier Illarramendi in a 1–2 away loss against SD Eibar, but being taken off three minutes later due to an injury.

On 19 July 2019, after spending the campaign nursing his knee injury, Merquelanz joined Segunda División side CD Mirandés on loan for one year. He scored his first professional goal on 24 August, netting the equalizer in a 1–2 home loss against Cádiz CF. Merquelanz was a regular starter for the Castilian-Leonese side, scoring a career-best 15 goals and helping the club avoid relegation and reach the semi-finals of the Copa del Rey.

Upon returning to Real Sociedad, he agreed to a contract extension with the club until 2025.