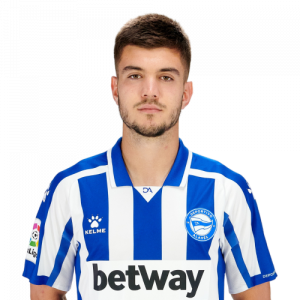 Martín Aguirregabiria Padilla (born 10 May 1996) is a Spanish professional footballer who plays for Deportivo Alavés as a right back.

Born in Vitoria-Gasteiz, Álava, Aguirregabiria joined Deportivo Alavés’s youth setup in 2008, aged 12. He made his senior debut with the reserves in the 2014–15 campaign, in Tercera División.

After Carlos Vigaray’s knee injury, Aguirregabiria made his La Liga debut on 4 December 2017, starting in a 3–2 away win against Girona FC. Ten days later, he extended his contract until 2021.

On 8 June 2018, Aguirregabiria renewed his contract until 2022, being definitely promoted to the main squad. He scored his first professional goal on 31 October, netting his team’s second in a 2–2 home draw against Girona FC, for the season’s Copa del Rey.