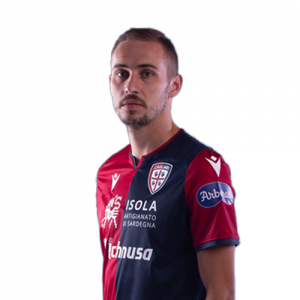 Marko Rog (born 19 July 1995) is a Croatian professional footballer who plays as a central midfielder for Cagliari and the Croatia national team.

Early career
Rog started his senior football in 2013 with NK Varaždin, which was coming off being suspended in the 2011–12 season due to financial difficulties. The club, previously in the Prva HNL, were allowed back in at the 3. HNL, where Rog was Varaždin’s top goalscorer, scoring 17 times in 30 league matches, as his side finished 7th.

He moved to Croatian First Football League side RNK Split in the summer 2014 for an undisclosed fee, though it did not help Varaždin, which folded in 2015 (no relation to the NK Varaždin (2012) club). On 28 July 2014, Rog made his professional debut for RNK Split playing against Istra 1961. His first and only season with Split was highly successful, scoring nine goals in 44 appearances.

Dinamo Zagreb
In June 2015, Rog joined Dinamo Zagreb. He signed a five-year contract with the club for a reported fee of €5 million; a record transfer for the Croatian league. On 12 July 2015, aged 19, he made an official league debut for Dinamo Zagreb, coming on as a substitute for Ante Ćorić in a first league game of the season against Hajduk Split on the home stadium and also received a yellow card in the game.

Napoli
On 29 August 2016, Rog joined Serie A side Napoli on a five-year contract. He scored his first goal for the club in 3–1 win over Atalanta on 27 August 2017. All 28 of his games in the 2017–18 season which he played in Serie A were played from the substitutes’ bench, as were all of his other matches, except from one match in the UEFA Europa League and two matches in the Coppa Italia. He was versatile in this season, playing in the right and centre of midfield, and at centre forward, at various stages in the campaign. He scored one goal (against Atalanta) and made one assist (against Red Bull Leipzig). He received 4 yellow cards and played 251 minutes of football.

Sevilla (loan)
On 29 January 2019, Rog joined on loan to Spanish La Liga side Sevilla until 30 June 2019. Rog started his first two matches for Sevilla in La Liga in defeats against Barcelona and Huesca. He also started in a 3–0 loss to Leganes and a 2–0 victory over Athletic Bilbao. He made six further appearances in the league from the bench. He featured in three matches in the UEFA Europa League. At Sevilla, his passing success rate was 86.4% and he was given two yellow cards.

Cagliari (loan)
On 17 July 2019, Cagliari bought the footballer from Napoli. Rog joined Cagliari on loan with an obligation set at €18 million including bonuses.