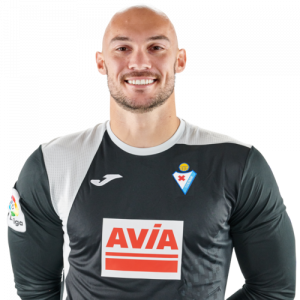 Marko Dmitrović (born 24 January 1992) is a Serbian professional footballer who plays for Spanish club SD Eibar as a goalkeeper.

Born in Subotica, Dmitrović was a Red Star Belgrade youth graduate, being promoted to the main squad in 2010. On 3 September 2013, after making no senior appearances for the side, he moved to Hungarian Nemzeti Bajnokság I club Újpest FC.

Dmitrović made his professional debut on 1 March 2014, starting in a 2–3 away loss against Budapest Honvéd FC. He finished the campaign with 12 appearances, as his side narrowly avoided relegation.

On 6 January 2015 Dmitrović signed an 18-month contract with Charlton Athletic, for an undisclosed fee. He made his debut for the club on the 24 January 2015, starting in a 0–0 away draw against Wolverhampton Wanderers.

On 27 July 2015 Dmitrović was loaned to Spanish Segunda División side AD Alcorcón, for one year. On 7 July of the following year, after being an undisputed starter, he signed a permanent three-year deal with the Madrid side.

On 23 June 2017, Dmitrović signed a four-year contract with SD Eibar in La Liga. He made his debut in the category on 21 August, starting in a 1–0 away win against Málaga CF. In May 2018, Dmitrović was elected for the best player of SD Eibar for the 2017–18 season. On 21 January 2021, he scored the first goal in his career from the penalty mark in a 1–2 defeat against Atlético Madrid.