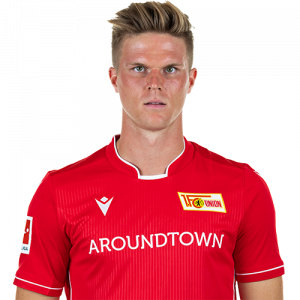 Marius Bülter (born 29 March 1993) is a German professional footballer who plays as a winger for 1. FC Union Berlin.

Early career and Magdeburg
Born in Ibbenbüren, Bülter played for Eintracht Rheine, SuS Neuenkirchen and SV Rödinghausen before signing for 1. FC Magdeburg in the summer of 2018. Over the 2018–19 season, Bülter made 32 appearances, scoring four goals, in a season where Magdeburg would get relegated to the 3. Liga.

Union Berlin
On 4 July 2019, Bülter joined Bundesliga club 1. FC Union Berlin on a season-long loan, with the club having the option to make the transfer permanent at the end of the season. He made his debut for Union in their first Bundesliga appearance: a 4–0 defeat at home to RB Leipzig. His first goals for Union came in a stunning 3–1 victory at home to Borussia Dortmund: The opening and winning goals in Union’s first win in the Bundesliga.