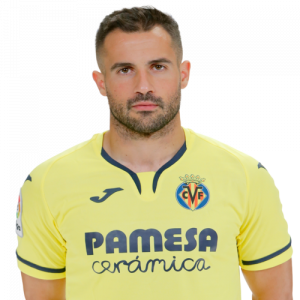 Mario Gaspar Pérez Martínez (born 24 November 1990) is a Spanish professional footballer who plays for and captains Villarreal as a right-back.

He has spent his entire career at Villarreal, making over 400 official appearances.

Born in Novelda, Alicante, Valencian Community, Mario Gaspar played youth football for Villarreal CF. On 15 March 2009, aged just 18, he made his first-team – and La Liga – debut, in a game against Atlético Madrid: he replaced Giuseppe Rossi with roughly 25 minutes to play, with the score at 2–1, but the Yellow Submarine eventually lost 2–3 away.

Mario Gaspar spent the entire 2009–10 season with the reserves, starting in all 31 games he appeared in as they easily retained their newly-found Segunda División status. He was definitely promoted to the main squad midway through the following campaign following Ángel López’s severe knee injury, being also propelled to the starting XI.

On 16 January 2011, in his first start, Mario Gaspar played the full 90 minutes in a 4–2 home win over CA Osasuna, finishing the season with 22 appearances. He scored his first competitive goal on 1 May 2012, opening a 3–2 victory at Sporting de Gijón towards the end of a campaign which finished with relegation. In May 2014, with a year remaining on his contract, it was extended for a further four.

Mario Gaspar scored his first goal in European competition on 21 August 2014, concluding a 3–0 away defeat of FC Astana in the first leg of their UEFA Europa League play-off (7–0 aggregate). In January 2017, he signed a new deal to last until 2023.

On 18 March 2018, Mario Gaspar played his 300th official match for Villarreal, in a 2–1 win at Atlético; only Cani, Marcos Senna and teammate Bruno Soriano had reached that figure before for the club. He filled in as captain during the lengthy injuries of the last of those players, and on 21 April 2021 with a 2–1 loss at Deportivo Alavés he joined him at 400 matches.