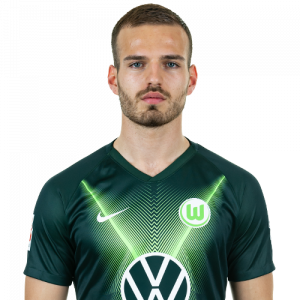 Marin Pongračić (born 11 September 1997) is a Croatian footballer who plays as a defender for Bundesliga club VfL Wolfsburg and the Croatia national team.

Pongračić is principally a central defender but can also play at right-back or as a defensive midfielder.

After the injury-stricken stint at Salzburg, Pongračić joined VfL Wolfsburg on 15 January 2020 on a four-and-a-half year deal for a fee believed to be €10 million. On 8 February, in his second appearance for the club, he was sent off after elbowing Alfredo Morales, as Wolfsburg drew 1–1 with Fortuna Düsseldorf. On 26 May, Pongračić scored twice as Wolfsburg defeated Bayer Leverkusen by a score of 4–1.

After he missed the beginning of the new season due to mononucleosis, Pongračić returned to the team on 8 November as an injury time substitute for Xaver Schlager in the 2–1 victory over 1899 Hoffenheim. However, on 18 November, he tested positive for COVID-19. On 27 February 2021, he was sent off in the injury time of a 2–0 victory over Hertha Berlin.