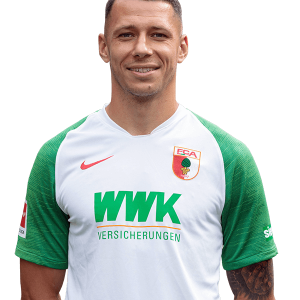 Marek Suchý (born 29 March 1988) is a Czech professional footballer who plays as a defender for FC Augsburg and captains the Czech Republic national football team.

In January 2014, Suchý was loaned out to Swiss outfit FC Basel for the second half of the 2013–14 Swiss Super League season, again with a buying option at the end of that period. Suchý played his debut for Basel on 2 February 2014 in the 3–1 away win at the Stade Olympique de la Pontaise against Lausanne-Sport. Just three days later he scored his first goal for his new team in the Swiss Cup Quarterfinal match against Le Mont on 5 February 2014 as Basel won 6–1. At the end of the 2013–14 Super League season Suchý won the league championship with Basel. They also reached the final of the 2013–14 Swiss Cup, but were beaten 2–0 by Zürich after extra time. Basel had qualified for Europa League knockout phase and here they advanced as far as the quarter-finals.

Basel bought out his contract after the end of the loan. The season 2014–15 was a very successful one for Basel. The championship was won for the sixth time in a row that season and in the 2014–15 Swiss Cup they reached the final. But for the third season in a row, they finished as runners-up, losing 0–3 to FC Sion in the final. Basel entered the Champions League in the group stage and reached the knockout phase as on 9 December 2014 they managed a 1–1 draw at Anfield against Liverpool. But then Basel then lost to Porto in the Round of 16. Basel played a total of 65 matches (36 Swiss League fixtures, 6 Swiss Cup, 8 Champions League and 15 test matches). Under trainer Paulo Sousa Suchý totaled 48 appearances, 30 League, 4 Cup, 7 Champions League, as well 11 in test games. He scored 3 goals in these matches 1 of which was in the Super League.

Under trainer Marcel Koller Basel won the Swiss Cup in the 2018–19 season. In the first round Basel beat FC Montlingen 3–0, in the second round Echallens Région 7–2 and in the round of 16 Winterthur 1–0. In the quarter finals Sion were defeated 4–2 after extra time and in the semi finals Zürich were defeated 3–1. All these games were played away from home. The final was held on the 19 May 2019 in the Stade de Suisse Wankdorf Bern against Thun. Striker Albian Ajeti scored the first goal, Fabian Frei the second for Basel, then Dejan Sorgić netted a goal for Thun, but the end result was 2–1 for Basel. Suchý played in three cup games. On 8 July 2019, Suchý joined FC Augsburg on a two-year deal.