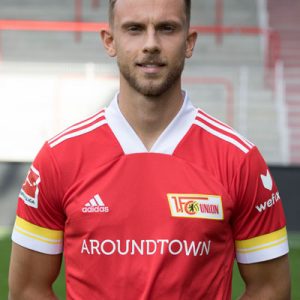 Marcus Ingvartsen (born 4 January 1996) is a Danish professional footballer who plays as a forward for Union Berlin and the Denmark national team.

Ingvartsen started his career in his native Denmark for Superliga side FC Nordsjælland. finished the 2016–17 Danish Superliga season as the top scorer in the league with 23 league goals; finishing 3 goals ahead of next top scorer Teemu Pukki. Ingvartsen also won the Young Players of the Year award for that season, as a result of his impressive league performances. He also won the league’s player of the month award for both November and April during the season. He went on to score 30 goals in 76 matches for Nordsjælland.

After his standout season, Belgian club Genk bought Ingvartsen during the summer of 2017. Ingvartsen started his first season with Genk with a few late substitute appearances for them. But in his first full game for Genk, Ingvartsen scored twice against Eupen to earn Genk a 3–3 draw. Ingvartsen scored again in Genk’s next league game against Mouscron. Ingvartsen scored more league goals against Kortijk and Ostend before a serious knee injury at the beginning of 2018 ended his season.

Before his injury, Ingvartsen also played a key role in getting Genk to the final of the Belgian Cup. He equalised against K.V. Mechelen in the seventh minute to earn a 1–1 draw and he scored again when the game went to a penalty shoot out, which Genk won. Ingvartsen scored again in Genk’s quarter-final penalty shoot out win over Waasland-Beveren. In Genk’s semi-final match against K.V. Kortrijk, Ingvartsen scored the opening goal of the match, which helped Genk reach the final. Genk lost 1–0 to Standard Liège in the final of the Belgian Cup on 17 March 2018.

Ingvartsen was injured at the start of the 2018–19 season and missed the early part of the league campaign. When he returned from injury, he helped Genk win the Belgian First Division league title.

In June 2019, Ingvartsen signed for newly promoted Bundesliga side FC Union Berlin on a three-year deal. He made his debut for the club on 11 August in the 0–6 away win over VfB Germania Halberstadt in the second round of the DFB-Pokal.