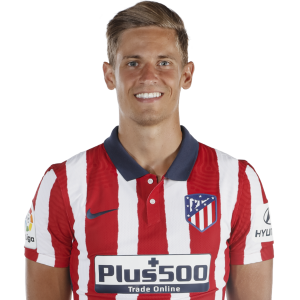 Marcos Llorente Moreno (born 30 January 1995) is a Spanish professional footballer who plays as a midfielder or second striker for Atlético Madrid and the Spain national team.

Born in Madrid, Llorente joined Real Madrid’s youth setup in 2008, aged 13. In July 2014, after impressing with the Juvenil squad, he was promoted straight to the reserves by manager Zinedine Zidane.

On 24 August 2014, Llorente made his senior debut, starting in a 1–2 away loss against Atlético Madrid B for the Segunda División B championship. He appeared in 25 matches during the campaign, totalling 1,637 minutes of action.

Llorente spent the 2015 pre-season with the first team, appearing in friendlies against Manchester City, Inter Milan and Vålerenga Fotball. He made his professional – and La Liga – debut on 17 October of that year, coming on as a second-half substitute for Mateo Kovačić in a 3–0 home win over Levante UD.

On 10 August 2016, Llorente was loaned to La Liga club Deportivo Alavés for one season. On 10 September of that year, he featured the full 90 minutes in a 2–1 win at FC Barcelona.

On 23 September 2017, Llorente’s contract was extended until 2021. He made one appearance during the campaign’s UEFA Champions League, when Madrid won their third consecutive and 13th overall title in the tournament.

Llorente scored his first competitive goal for the team on 22 December 2018, netting the second in the 4–1 victory over Al Ain FC for the final of the FIFA Club World Cup and being named player of the match in the process.

Atlético Madrid
On 20 June 2019, Llorente was signed by local rivals Atlético Madrid on a five-year contract for a reported fee of £35 million. He made his official debut on 18 August, playing 25 minutes in the 1–0 home win against Getafe CF. His first goal came the following 14 February, when he put his team ahead in a 2–2 draw at Valencia CF.

On 11 March 2020, during extra time of the Champions League round-of-16 tie away to defending champions Liverpool, Llorente scored twice to tie the match 2–2 after replacing Diego Costa early into the second half, in an eventual 3–2 win and qualification. On 17 June, he was named man of the match in the league game at CA Osasuna after coming from the bench in the 63rd minute, scoring a solo goal and later assisting twice in the 5–0 rout.