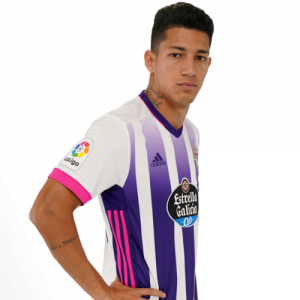 Born in São Luís but raised in Coroatá, Marcos André represented Sobradinho, Araguaína and Guaratinguetá as a youth. In March 2015, he went on a trial at La Liga side RC Celta de Vigo, signing a two-year contract in July and being initially assigned to the reserves.

In October 2015, Marcos André was loaned to Tercera División side SD Órdenes until the end of the season. The following 31 August, he moved to fellow fourth division side UD Logroñés B also in a temporary deal; during the campaign, he also featured regularly for the main squad in Segunda División B.

On 17 July 2017, Marcos André’s loan was renewed for two years, now definitely assigned to the first team. He was a regular starter for the club, scoring 11 goals in 2017–18 and ten goals in 2018–19 as the club missed out promotion in the play-offs.

On 23 July 2019, Marcos André agreed to a four-year deal with Real Valladolid, being assigned to the B-team in the third division. On 30 August, he was loaned to Segunda División side CD Mirandés for one year.

Marcos André made his professional debut on 31 August 2019, coming on as a second-half substitute for Mario Barco in a 0–2 away loss against CD Numancia. He scored his first goal in the second division on 29 September, netting the opener in a 1–1 away draw against Deportivo de La Coruña, and ended the season with 12 goals under his name.

Upon returning from loan, Marcos André was assigned to the first team in La Liga, and made his debut in the category on 3 October 2020 by starting in a 1–2 home loss against SD Eibar. In his second appearance on 8 November, he scored his team’s second in a 2–1 home success over Athletic Bilbao.