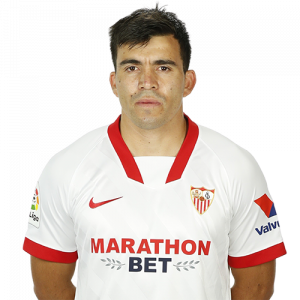 He can play as left back or left wing-back.

Early career
Acuña began his athletic training at Club Don Bosco in his hometown. At that time he played as a left wing-back. His good performance got him noticed by scouts who invited him to perform tests at various clubs in Buenos Aires. Thus, at age 13 he tried out for but did not stay at Boca Juniors and San Lorenzo de Almagro. Four years later he tried out for Quilmes, River Plate and Tigre before ultimately being taken by Ferro Carril Oeste. After a few seasons in Ferro’s reserve team, he was promoted to the first team. He made his debut in 2009 in a match for the Primera B Nacional playing as a winger under coach José María Bianco. Already in the 2013–14 season he stood out for his ability to assist his peers, providing 12 assists, which caught the attention of major clubs. At Ferro, Acuña played a total of 117 matches, with 5 goals and 23 assists.

Racing Club
On 18 July 2014, Acuña moved to Racing Club for a net fee of 4,900,000 pesos for 50% of his rights, with the option to buy another 25% at $750,000. On 27 July 2014, he played his first game with the Academia in a match for the knockout phase of the 2013–14 Copa Argentina against San Martín de San Juan, in which he also scored the winning goal on a header to give Racing a 1–0 victory. Later that year he was part of Racing’s championship team that won the 2014 Argentine Primera División, cutting a streak of 13 years without titles for the Avellaneda side, in which Acuña played 15 games and scored two goals.

Sporting CP
On 12 June 2017, Racing president Víctor Blanco confirmed that Acuña would be leaving the club for Sporting CP. He made his debut for the Portuguese team in a 2–0 away victory over Desportivo Aves. On 15 May 2018, Acuña and several of his teammates, including coaches, were injured following an attack by around 50 supporters of Sporting at the club’s training ground after the team finished third in the league and missed out on the UEFA Champions League qualification. Despite the attack, he and the rest of the team agreed to play in the Portuguese Cup final scheduled for the following weekend, eventually losing to C.D. Aves.