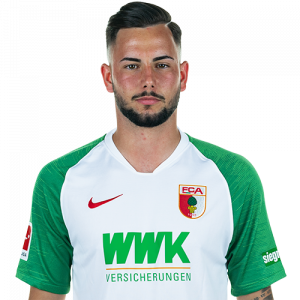 Marco Richter (born 24 November 1997) is a German footballer who plays as a forward for FC Augsburg.

Born in Friedberg, Bavaria, Richter started his career with local side SV Ried 1951. After being scouted by German giants Bayern Munich on a talent day, he played for their youth department between 2004 and 2012. After eight seasons in Munich he joined the FC Augsburg academy, and on 22 May 2015 he made his debut for the Augsburg reserves in a 2–1 loss to the FC Ingolstadt 04 reserves in the German fourth division. In the following season, he scored seven goals in 16 regular season appearances and two relegation matches. Concurrently, with 24 goals in 16 appearances for the FC Augsburg Under-19 team, Richter helped secure promotion to the Under 19 Bundesliga. In the 2016–17 season for the reserves, Richter scored 23 goals in 27 appearances, making him third on the topscorer list for the season. On 30 July 2016, he attracted nationwide attention when the FC Augsburg reserves won 12–0 over SV Seligenporten, with Richter scoring seven goals in the match.

FC Augsburg
After impressing for the reserve team, Richter was called up for the senior squad and made his Bundesliga debut on 14 October 2017, coming on as a 87th minute substitute for Kevin Danso in a 2–2 draw against TSG 1899 Hoffenheim. On 4 February 2018, Richter made his first professional goal in a 3–0 home win over Eintracht Frankfurt. His first brace also came against Frankfurt, on 14 April 2019, in a 3–1 away win.