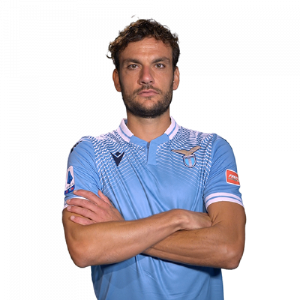 Marco Parolo (Iborn 25 January 1985) is an Italian professional footballer who plays as a central midfielder for Serie A club Lazio and the Italian national team.

Throughout his club career, Parolo has played for Como, Pistoiese, Foligno, Verona, Cesena, and Parma, before moving to Lazio in 2014. At international level, he has represented Italy at the 2014 FIFA World Cup and at UEFA Euro 2016.

On 30 June 2014, Claudio Lotito, chairman of Serie A club Lazio, announced the signing of Parolo from Parma, subject to a medical. The transfer fee was later revealed as €4.5 million.

On 19 October 2017, S.S. Lazio announced that its midfielder, Marco Parolo, had signed a new deal until June 2020. On 5 February 2017, Parolo scored four goals in a 6–2 away victory over Pescara. Marco Parolo has become a fundamental part of Lazio starting XI usually playing full matches and resting very little due to his high level of importance. He plays in a holding midfield type of role where he often scores with frequent runs through the opposition’s defense. On 8 November 2018 Parolo scored the opening goal of Lazio’s fourth group stage game of Europa League helping his team to qualify for the knockout stage with two games to spare.