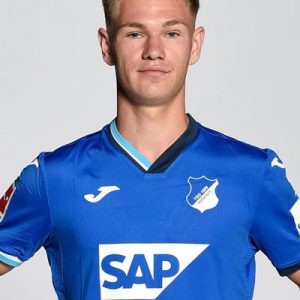 Marco John (born 2 April 2002) is a German footballer who plays as a midfielder for 1899 Hoffenheim.

John made his professional debut for 1899 Hoffenheim in the UEFA Europa League on 3 December 2020, starting in the home match against Serbian SuperLiga side Red Star Belgrade.

After being in the matchday squad a few times for the first team at the beginning of the 2020/21 season, he made his debut on the penultimate matchday of the group stage of the Europa League when he played for the full 90 minutes against Red Star Belgrade. In the same season he was also on the field for the second team and the A-Juniors. On January 9, 2021 (15th matchday) he played for the full 90 minutes in the 4-0 defeat against FC Schalke 04 and thus made his Bundesliga debut.  Due to the Kraichgauer’s injury problems, he played more and more often and extended his contract to 2024 in February 2021.