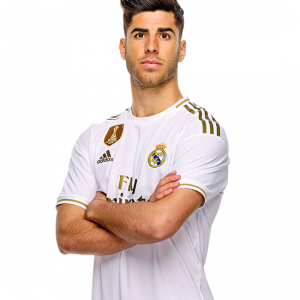 Marco Asensio Willemsen (born 21 January 1996) is a Spanish professional footballer who plays as a winger and attacking midfielder for Real Madrid and the Spain national team.

After starting out at Mallorca, he signed with Real Madrid in November 2014, being consecutively loaned to his former club as well as Espanyol. Upon his return, he has gone on to win several honours, including two Champions League and two La Liga trophies.

Asensio made his senior debut for Spain in 2016. He represented the nation at the 2018 World Cup.

On 24 November 2014, Real Madrid reached an agreement in principle to sign Asensio. On 5 December the deal was officially announced, with the player (who had been a supporter of the club as a child) signing a six-year deal for a €3.9 million fee and remaining with the Bermellones on loan until the end of the campaign. According to Real Madrid president Florentino Pérez, Spanish tennis player Rafael Nadal played a crucial role in the transfer of Marco Asensio to Real Madrid.