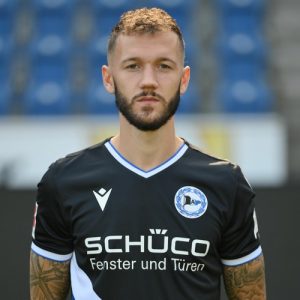 Marcel Hartel (born 19 January 1996) is a German professional footballer who plays as a midfielder for Arminia Bielefeld.

Early career
Born in Köln, Hartel started playing football as a youth for SC West Köln. In 2002, he joined 1. FC Köln’s youth system. Having moved through the club’s youth ranks, he made his Bundesliga debut on 20 February 2016, in a 1–0 away defeat against Borussia Mönchengladbach. During the 2016–17 season, he made 12 appearances for 1. FC Köln’s reserves scoring 3 goals and contributing 5 assists.

Union Berlin
In May 2017, Union Berlin announced the signing of Hartel on a three-year deal. He scored his first goal for the club in a 1–1 draw with Arminia Bielefeld. On 31 January 2019, he scored against his former side, Köln, after controlling the ball up into the air and hitting a stunning bicycle kick.