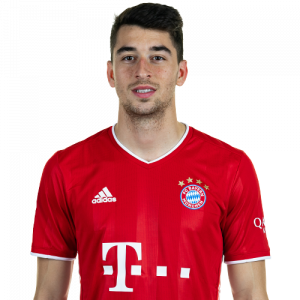 He started his career at Espanyol, appearing in 121 competitive matches and four La Liga seasons. In October 2020, he signed with Bayern Munich.

Roca won the 2019 European Under-21 Championship with Spain.

Espanyol
Born in Vilafranca del Penedès, Barcelona, Catalonia, Roca joined RCD Espanyol’s youth setup in 2008, aged 11. On 24 August 2014, he made his senior debut with the reserves, starting in a 2–2 Segunda División B home draw against Lleida Esportiu.

Roca scored his first senior goal on 17 January 2015, his team’s second in a 2–3 home loss to UE Olot. On 4 August he renewed his contract until 2017, and was promoted to the B side shortly after.

On 26 August 2016, Roca made his first-team – and La Liga – debut, starting in a 2–2 home draw against Málaga CF. On 11 November, he agreed to an extension until 2022 and was permanently promoted to the main squad the following season.

Roca scored his first goal in the top flight on 21 April 2019, in a 2–2 draw at Levante UD. He played 44 matches across all competitions in the 2019–20 campaign, but the club was relegated to Segunda División for the first time in 26 years.

Bayern Munich
On 4 October 2020, Roca signed for FC Bayern Munich on a five-year contract. He made his official debut 11 days later, in a 3–0 defeat of amateurs 1. FC Düren in the first round of the DFB-Pokal. He appeared in his first Bundesliga game later that month, coming on as an injury-time substitute for Serge Gnabry in the 2–1 away victory over 1. FC Köln.

Roca played his first-ever game in the UEFA Champions League on 25 November 2020, starting and being sent off for two bookable offences midway through the second half on an eventual 3–1 group stage win against FC Red Bull Salzburg.