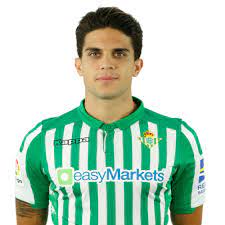 Marc Bartra Aregall (born 15 January 1991) is a Spanish professional footballer who plays as a centre-back for Real Betis and the Spain national team.

He started his career at Barcelona, where he played 103 professional games and scored six goals across seven seasons, winning 13 honours including five La Liga titles. In 2016, he joined Borussia Dortmund for €8 million.

Barcelona
Born in Sant Jaume dels Domenys, Tarragona, Catalonia, Bartra joined RCD Espanyol as a child before moving to FC Barcelona’s youth system, La Masia, at age 11. After progressing through its ranks, he was promoted to the B-side in 2009.

Borussia Dortmund
On 3 June 2016, Bartra was sold to German club Borussia Dortmund for an estimated fee of €8 million, signing a four-year deal. He made his competitive debut on 14 August, playing the entire 0–2 loss against FC Bayern Munich for the DFL-Supercup, and a month later scored his first goal in a 6–0 win at Legia Warsaw for the group stage of the UEFA Champions League.

Betis
On 30 January 2018, Bartra completed his transfer to Real Betis on a five-and-a-half-year contract. He scored his first goal for his new team on 12 May, putting the hosts ahead in an eventual 2–2 derby home draw against Sevilla FC.