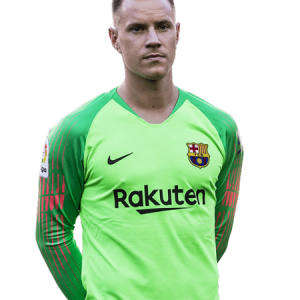 Marc-André ter Stegen is a German professional footballer who plays as a goalkeeper for Spanish club Barcelona and the Germany national team.

Known for his reflexes, passing, and ball-playing ability, he is considered as one of the best goalkeepers in the world.

After four seasons in the Bundesliga with Borussia Mönchengladbach, making 108 league appearances, he joined Barcelona for €12 million in 2014. He won the treble in his first season in Spain, playing for Barcelona in Copa del Rey and UEFA Champions League.

Ter Stegen represented Germany at several youth levels and made his senior international debut in 2012. He was part of the German squads that reached the semi-finals of UEFA Euro 2016 and won the 2017 FIFA Confederations Cup, and was also a member of the German side that took part at the 2018 FIFA World Cup.

On 19 May 2014, Ter Stegen was announced as the new goalkeeper of Spanish club Barcelona, alongside Chilean goalkeeper Claudio Bravo, after the departures of Víctor Valdés and José Manuel Pinto, effective during the summer transfer window. On 22 May 2014, he signed a five-year contract that would keep him at the club until June 2019. The transfer fee was €12 million (£9.7 million), and the buy-out clause was set to €80 million (£63.6 million). After the move, Ter Stegen said joining the club was the right move and that he aimed to settle at the club.