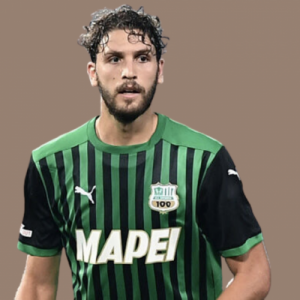 Manuel Locatelli (born 8 January 1998) is an Italian footballer who plays as a midfielder for Serie A club Sassuolo and the Italy national team.

Early career
Locatelli began his career with Atalanta, before moving to Milan at the age of 11 years. With the Rossoneri he progressed through each youth category, from Esordienti to Primavera. In March 2015, Locatelli signed his first professional contract with Milan, effective from 1 July 2015 until 30 June 2018.

Milan
Locatelli received his first ever call-up to Milan’s senior team ahead of the away game against Udinese played on 22 September 2015; he, however, remained an unused substitute. Later that season, he was promoted into the first team by Milan then head coach Siniša Mihajlović. He made his Serie A debut aged 18, on 21 April 2016, replacing Andrea Poli after 87 minutes in a 0−0 home draw against Carpi. On 14 May 2016 he made his debut as a starter, in the last league match of the season against Roma at the San Siro.

Sassuolo
In the summer of 2018, Milan loaned in Tiémoué Bakayoko and suggested that Locatelli joins one of the lower-ranking Serie A teams on loan, preferably without a buy-out option. Locatelli agreed to depart yet submitted a full transfer request, later citing a perceived lack of trust in him from the club as the main reason for his decision. On 13 August 2018, Locatelli transferred to Sassuolo on loan with an obligation to buy. In his debut season for the neroverdi he made 31 appearances and scored 3 goals (against Catania in Coppa Italia and Cagliari and Chievo Verona in Serie A).