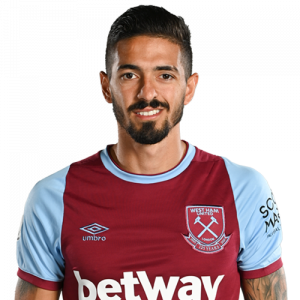 Manuel Lanzini (born 15 February 1993) is an Argentine professional footballer who plays as an attacking midfielder for Premier League club West Ham United and the Argentina national team. He has previously played for River Plate and Fluminense. He is described as possessing phenomenal dribbling ability, as well as fantastic acceleration and vision and the ability to ghost past defenders. He is nicknamed “La Joya” (“the jewel”).

He currently holds the record of being the player that scored the earliest goal in the history of Argentina’s derby, the Superclásico, scoring only 43 seconds after the beginning of the match.

In May 2016, Lanzini was named in Argentina’s provisional 35-man squad for the 2016 Olympics in Rio de Janeiro. He withdrew from the squad in July 2016 following a knee injury sustained while training in Miami, Florida, returning to London for treatment with West Ham United. In May 2017 Lanzini was named in new Argentina manager Jorge Sampaoli’s first squad for the upcoming friendlies against Brazil and Singapore, with Lanzini making his full international debut on 9 June against Brazil at the MCG in Melbourne, Australia, replacing Ever Banega in the 81st minute of La Albiceleste’s 1–0 win. On 23 March 2018 he played a friendly match against Italy at Etihad Stadium in Manchester and scored his first international goal, as Argentina secured a 2–0 victory.

On 21 May 2018 he was named in Argentina’s final 23-man squad for the 2018 FIFA World Cup in Russia, and started in the 4–0 friendly win against Haiti on 29 May in Buenos Aires, playing an hour before being substituted for Maximiliano Meza. On 8 June 2018, Lanzini was ruled out of the World Cup after suffering a ruptured anterior knee ligament injury during the training session.