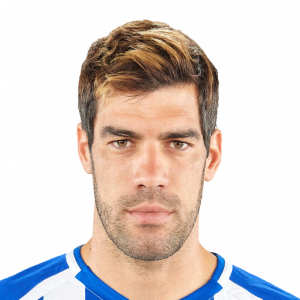 Mainly a central midfielder, he can also play as a winger or a left back.

In June 2012, García moved to Deportivo Alavés. He was an ever-present figure in his first year, appearing in 37 league matches to help his team achieve promotion to the second division in the playoffs.

García appeared in his first game as a professional on 24 August 2013, a 1–1 home draw against UD Las Palmas. He scored his first professional goal on 15 September 2013, in a 1–2 away loss to Real Murcia. On 2 July 2014, he signed a new two-year contract with the Basques.

García contributed 37 appearances and five goals in 2015–16, and Alavés returned to La Liga after ten years. He made his debut in the league on 21 August, starting and scoring a last-minute equaliser in a 1–1 draw at Atlético Madrid.

On 6 October 2018, after having come on as a 74th-minute substitute for Mubarak Wakaso, García netted 21 minutes later from a corner kick to help his team get their first win against Real Madrid in 88 years.