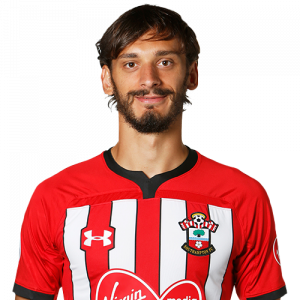 Manolo Gabbiadini (born 26 November 1991) is an Italian professional footballer who plays as a striker for Sampdoria.

He is a former Italy under-20 and under-21 international. Gabbiadini has represented the senior Italian national team since 2012.

He began his professional career with Atalanta, where he made his Serie A debut on 14 March 2010. The following season, he was sold in co-ownership to Cittadella, where he spent one season before returning to Bergamo. In August 2012, Juventus acquired 50% of his player rights in a new co-ownership agreement, although he was immediately loaned to Bologna. In July 2013, he was once again sold in co-ownership to Sampdoria, where he scored a personal best of ten goals in the Italian top flight. In July 2015, he was sold to Napoli, before moving to Southampton during the 2017 January transfer window. In 2019 he returned to Sampdoria.

Return to Sampdoria
On 11 January 2019, Gabbiadini returned to Italy and signed with former club Sampdoria, for a reported fee of £12 million.