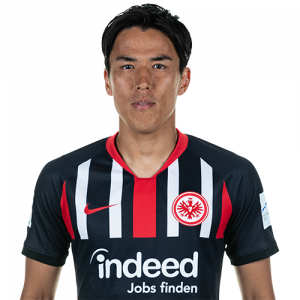 Makoto Hasebe (born 18 January 1984) is a Japanese professional footballer who plays as a defensive midfielder for Eintracht Frankfurt. He played for the Japan national team, for which he served as captain.

After graduating from Fujieda Higashi High School in 2002, he joined Urawa Reds. He became a regular of their first team in the 2003 season. He played mainly as defensive midfielder with Keita Suzuki. In 2004, he was honoured with the J.League Cup New Hero Award and selected as a member of J.League team of the year. He was also the Urawa Fans’ Player of the Year that season. The Reds won the championship in the 2006 J1 League for the first time in the club history and the first Asian title of the 2007 AFC Champions League.

It was reported in October 2007 that Italian Serie A side A.C. Siena was keen to sign Hasebe the following January. However, he signed for Bundesliga side Wolfsburg becoming the first Japanese player ever to play for the Wolves. In 2009, he became the second Japanese player to win the Bundesliga title.

On 29 April 2010, it was announced that Hasebe extended his contract with Wolfsburg until 2012. On 17 September 2011, Hasebe played in goal for the final nine minutes of an away match against 1899 Hoffenheim. Wolfsburg lost the match 3–1, with Hasebe conceding Hoffenheim’s third goal on 85 minutes. On 3 December 2011, he played his 100th Bundesliga match against 1. FSV Mainz 05. On 2 September 2013, Hasebe signed a three-year contract with 1. FC Nürnberg. On 1 July 2014, Hasebe signed with Eintracht Frankfurt.