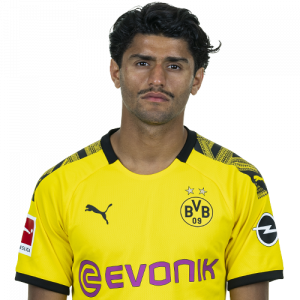 Mahmoud Dahoud (born 1 January 1996) is a German professional footballer who plays as a midfielder for Bundesliga club Borussia Dortmund and the Germany national team.

He made his professional debut for Bundesliga side Borussia Mönchengladbach in 2014, and made 86 appearances for the club before signing for Dortmund three years later.

Born in Syria, Dahoud has represented Germany internationally at U18, U19, and U21 level. He was part of the U21 side which won the UEFA European Under-21 Championship in 2017.

Borussia Dortmund
2017–18 season
Dahoud officially joined Borussia Dortmund on 1 July 2017. Dortmund’s sporting director Michael Zorc commented, “Mo Dahoud is a highly-talented and exciting central midfield player who we have been keeping very close tabs on for several years now. He has already proven that he can cut it at the highest level.” He made his debut for the club on 6 August, starting in a penalty shootout loss to Bayern Munich in the DFL-Supercup. On 12 August 2017, Dahoud assisted Pierre-Emerick Aubameyang in netting BVB’s third goal in Dortmund’s 4–0 cup win against sixth-tier club 1. FC Rielasingen-Arlen.