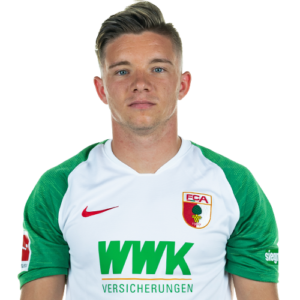 Valentin was promoted to the first team squad in the summer 2015, at the age of 19 and got his contract extended.

On 27 September 2015, Valentin got his Superliga debut in a game against AGF, who FCN won 2–0, where he came on the pitch in the 93th minute, replacing Oliver Thychosen. During the 2016–17 season, Valentin became a key player for FCN and the U21 national team.

Valentin’s contract got extended in the summer of 2017, and besides that, he also revealed that he dreamed of a foreign adventure. In September 2017, Valentin suffered from a horrible ligament injury in his knee, that would keep him out for at least 8 weeks.

In November 2018, Mads changed his shirt name from his nickname “Mini” to his middle name “Valentin” to honor his family.

On 27 June 2019, Valentin joined FC Augsburg on a contract until June 2024. Valentin got his official debut on 17 August 2019 against Borussia Dortmund where he also was noted for an assist in a 5–1 defeat. After only three games for Augsburg in his first half season, Valentin was loaned out to FC Zürich on 30 January 2020 for the rest of the season.