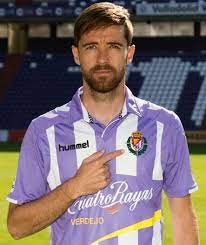 He achieved La Liga totals of over 160 games for Valencia, Deportivo, Levante, Getafe and Valladolid.

Valladolid
In August 2016, Míchel negotiated an end to his contract in China and signed a three-year deal with Real Valladolid. Having consolidated their place in the top flight, he extended by a further year at its conclusion.

Míchel’s link with Pucela was automatically renewed due to an appearances clause in the summer of 2020, amidst interest from Göztepe S.K. of Turkey. However he stayed put, and became the new captain in October after Javi Moyano left.