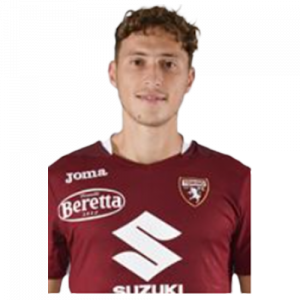 Mërgim Vojvoda (born 1 February 1995) is a Kosovan professional footballer who plays as a right-back for Italian club Torino and the Kosovo national team.

Early career
Vojvoda is a product of youth team systems of the different Belgian and Dutch sides such as JS Pierreuse, CSJ Grivegnée and MVV Maastricht. In 2011 at the age of 16, he joined with youth team of Standard Liège.

Loan at Sint-Truiden
On 20 August 2014, Vojvoda joined Belgian Second Division side Sint-Truidense, on a season-long loan. On 8 November 2014, he made his debut in a 1–0 away win against Roeselare after coming on as a substitute at 63rd minute in place of Pierre-Baptiste Baherlé.

Loan at Carl Zeiss Jena
On 22 June 2015, Vojvoda joined Regionalliga Nordost side Carl Zeiss Jena, on a season-long loan. One month later, he made his debut in a 3–0 away win against VfB Auerbach after coming on as a substitute at 73rd minute in place of Sören Eismann.

Mouscron
On 25 June 2016, Vojvoda joined Belgian First Division A side Mouscron. As part of the deal, Standard Liège secured a sell-on clause guaranteeing them 25% of the profits of a future transfer. On 30 July 2016, he made his debut as a professional footballer in a 2–1 home defeat against Anderlecht after being named in the starting line-up.

Return to Standard Liège
On 27 May 2019, Vojvoda signed a three-year contract with Belgian First Division A club Standard Liège and receiving squad number 27. Two years later, he made his debut in a 2–0 away win against Cercle Brugge after being named in the starting line-up.

Torino
On 26 August 2020, Vojvoda joined Serie A side Torino and receiving squad number 27. Torino reportedly paid a €5.5 million transfer fee. One day later, the club confirmed that he had signed on a four-year contract. He scored his first goal for the club on 3 May 2021 in a 1 0 home win against Parma.