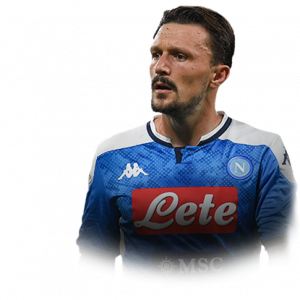 Mário Rui Silva Duarte (born 27 May 1991), known as Mário Rui, is a Portuguese footballer who plays as a left-back for Italian club Napoli and the Portugal national team.

Formed at Benfica, he spent most of his professional career in Italy, representing Empoli, Roma and Napoli in the Serie A.

Mário Rui was part of the Portuguese squad at the 2018 World Cup.

Early years and Empoli
Born in Sines, Setúbal District, Mário Rui started his career at local Vasco da Gama Atlético Clube. He then played for the youth teams of Sporting CP, Valencia CF and S.L. Benfica, being signed by Parma F.C. in summer 2011 and being loaned immediately to fellow Italians A.S. Gubbio 1910; he joined the Serie B club following that year’s FIFA U-20 World Cup, with the international transfer certificate arriving on 2 September.

In June 2014, Parma gave up the remaining 50% rights of Mário Rui to Empoli. He first appeared in the Italian top flight on 31 August, coming on as a 66th-minute substitute for Elseid Hysaj in a 0–2 away loss against Udinese Calcio.

Roma
On 8 July 2016, Mário Rui was signed by A.S. Roma in a temporary deal for a loan fee of €3 million (plus €1.5 million in bonuses), with a conditional obligation to sign him outright for an additional €6 million. He started the season injured, only making his debut on 19 January 2017 when he played 78 minutes in a 4–0 home win over U.C. Sampdoria for the Coppa Italia.

Napoli
On 13 July 2017, Mário Rui joined S.S.C. Napoli on an initial €3.75 million loan. Depending on the achievement of certain sporting targets, the club would have an obligation to buy him outright for a further €5.5 million. He scored his first goal in the Italian top division the following 10 February, helping the hosts defeat S.S. Lazio 4–1.