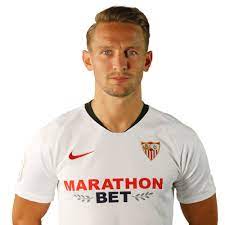 Luuk de Jong (born 27 August 1990) is a Dutch professional footballer who plays as a striker for La Liga club Sevilla and the Netherlands national team.

On 16 August 2020, de Jong scored the winning goal in a 2–1 victory over Manchester United in the semi-finals of the UEFA Europa League. On 21 August, he scored twice in a 3–2 win over Inter Milan in the final.