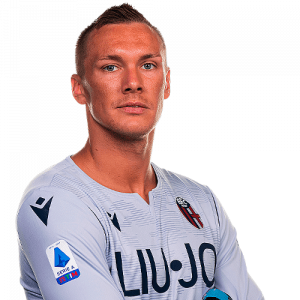 Łukasz Skorupski (born 5 May 1991) is a Polish professional footballer who plays as a goalkeeper for Italian club Bologna.

Early career
Born in Zabrze, started his professional career with Górnik Zabrze. In February 2011, he was loaned to Ruch Radzionków. He returned to Górnik half year later.

Roma
On 14 July 2013, Skorupski joined the Serie A giants A.S. Roma, signing a four-year contract. Skorupski made his debut for Roma in the 1–0 Coppa Italia victory over Sampdoria on 9 January 2014. Skorupski’s league debut came against Juventus, a 0–1 loss in the penultimate game of the season, he also played against Genoa the following, a defeat by the same scoreline.

On 30 September 2014, Skorupski made his European debut in the 1–1 Champions League draw against Manchester City.

Bologna
On 22 June 2018, Roma confirmed they had sold Skorupski to Bologna for a reported fee of around €9 million.