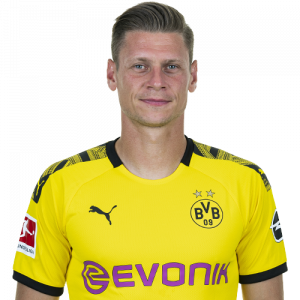 Łukasz Piotr Piszczek (born 3 June 1985) is a Polish professional footballer who plays for Bundesliga club Borussia Dortmund. He is primarily positioned as a right back, but is capable of playing as a central defender.

He also is Poland national team member, making his debut in 2007 and going on to receive over 60 caps. He was also selected for four tournaments during his time with the national team, playing in three UEFA European Championships and the 2018 FIFA World Cup. He confirmed his retirement from international football in 2018 following the conclusion of the FIFA World Cup. However, in November 2019 he made one more competitive appearance for the national team, informally dubbed his farewell game.

Gwarek Zabrze
Piszczek began his career as a striker. In 2001, he joined Gwarek Zabrze, coached by Vincent Soshinski, where he broke many goalscoring records at junior level and in 2003 won the Polish youth championship.

Zagłębie Lubin
Hertha BSC was attracted by his performances and promptly signed Piszczek in 2004, but then immediately loaned him out to Zagłębie Lubin. He made his debut on 16 October 2004, in a 7–0 win against GKS Katowice, scoring and assisting a goal for Wojciech Łobodziński in the process.

Hertha
In the fall of 2007, after three years with Zagłębie Lubin, Hertha recalled Piszczek back to the club. He scored his first goal in the Bundesliga on 26 April 2008, to earn one point against Hannover 96.

Piszczek missed most of the first half of the 2008–09 season as the result of a hip problem that eventually required surgery.

On 13 March 2018, Borussia Dortmund announced that the club had reached an agreement with Piszczek for a contract extension which will keep him at the club until 30 June 2020. Piszczek also announced that he would retire from professional football at the end of his contract, a claim he later clarified saying he’s still “not certain”. On 20 May 2020, Piszczek pushed back his retirement plans by signing a one-year contract extension with Borussia Dortmund, keeping him at the club until 2021.