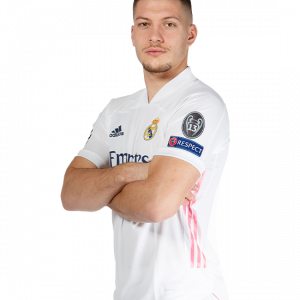 Luka Jović (born 23 December 1997) is a Serbian professional footballer who plays as a striker for Bundesliga club Eintracht Frankfurt, on loan from Real Madrid, and the Serbia national team.

In June 2017, Jović joined Eintracht Frankfurt on a two-season loan while his new club secured an option to sign him on a permanent basis. He made five appearances as they won the 2017–18 DFB-Pokal, and scored the only goal of the win at Schalke 04 in the semi-finals on 18 April 2018, but was an unused substitute in the 3–1 final win over Bayern Munich.

20-year-old Jović became the youngest player to score five goals in a Bundesliga game when he did so in a 7–1 home win over Fortuna Düsseldorf on 19 October 2018. On 14 March 2019, he scored the only goal, his seventh for the campaign, in a 1–0 win over Inter Milan to secure the club’s progression to the quarter finals of the Europa League. In doing so, he helped Eintracht become the first German club ever to record eight wins in a single season in the competition.

On 17 April 2019, Eintracht Frankfurt exercised a clause in Jović’s contract to make his loan move permanent until 30 June 2023. In May 2019, he scored in both semi-final legs against Chelsea, yet Eintracht Frankfurt lost 4–3 on penalties after drawing 1–1 in both matches. However, Jović managed to score ten goals in total in the Europa League season.

Jović started both semi-final and final match of 2019–20 Supercopa de España against Valencia and Atlético Madrid, respectively. Real won the final 4–1 on penalties on 12 January 2020, earning Jović his first trophy as a Real Madrid player. During an injury riddled season, he made 17 appearances during the league season, while scoring two goals, as Real Madrid won the 2019–20 La Liga title.

On 14 January 2021, Jović was loaned back to Eintracht Frankfurt until the end of the 2020–21 season. On 17 January, in his first match back with his former club, Jović came off the bench and scored two goals within half an hour as Frankfurt defeated Schalke 3–1.