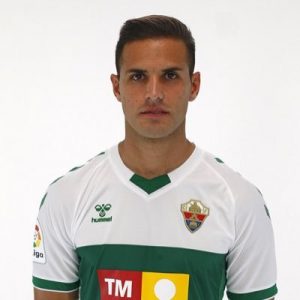 Luis Miguel Sánchez Benítez (born 5 May 1992), commonly known as Luismi, is a Spanish professional footballer who plays for Elche CF as a defensive midfielder.

Born in Puerto Serrano, Cádiz, Andalusia, Luismi graduated from Sevilla FC’s youth setup, making his debut as a senior with the C-side in Tercera División. In July 2012, he signed his first professional contract, also being promoted to the reserves in Segunda División B.

On 11 November 2012, Luismi broke two bones in his skull in the dying minutes of a 1–0 home win against Real Jaén, only returning to action on 31 March of the following year, against the same club. On 1 February 2014, he was called up by manager Unai Emery for a La Liga match against Málaga CF as a replacement for Cardiff City-bound Cala, also being selected to the game against UD Almería on 8 March but remaining on the bench on both occasions.

On 3 July 2014, Luismi penned a new two-year deal with the Andalusians, being also an unused substitute in the 2014 UEFA Super Cup 2–0 loss to Real Madrid at Cardiff City Stadium on 12 August. He made his first-team – and top division – debut on 23 August, replacing Vicente Iborra in the 80th minute of a 1–1 home draw against Valencia CF.

On 30 July 2015, Luismi signed his first professional deal, being definitely promoted to the main squad and being assigned the number 16. The jersey, worn by Antonio Puerta when he died playing for Sevilla in 2007, was only to be given to products of the club’s academy from that moment onwards; halfway through the campaign, however, he was stripped of the number when it was controversially handed to Argentine Federico Fazio.

After turning down a deal to play for the reserves in Segunda División, Luismi signed a two-year deal at fellow league team Real Valladolid on 29 June 2016. On 29 December, after being rarely used, he was loaned to Gimnàstic de Tarragona in the same league until June. He scored in his second appearance for the latter on 14 January 2017, opening a 1–1 draw at UCAM Murcia CF.

Upon returning, Luismi was a regular starter for Valladolid during the 2017–18 campaign, which ended in top-tier promotion. On 15 January 2020, however, after failing to feature in any league matches in the last two seasons (due to injury), he was loaned to Real Oviedo of the second division until June.

On 25 September 2020, Luismi agreed to a two-year contract with Elche CF, recently promoted to the top flight.