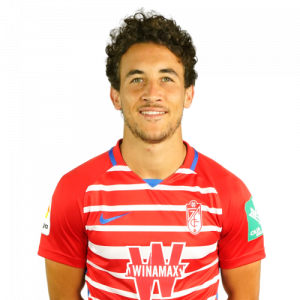 Luis Milla Manzanares (born 7 October 1994) is a Spanish footballer who plays for Granada CF as a central midfielder.

Early career
Born in Madrid, Milla joined Atlético Madrid’s youth setup in June 2012, from CF Rayo Majadahonda. He made his senior debut with the C-team in Tercera División during the 2013–14 season, before being loaned out to fellow league team UD San Sebastián de los Reyes on 17 January 2014.

In September 2015, Milla suffered a severe knee injury, returning to action seven months later. On 17 July of the following year, he moved to fellow third division side CF Fuenlabrada also in a temporary deal.

On 11 July 2017, free agent Milla signed a permanent four-year contract with Fuenlabrada. On 28 November, he scored the opener in a 2–2 draw against Real Madrid at the Santiago Bernabéu Stadium, scoring in the stadium 24 years after his father’s last goal.

Tenerife
On 19 January 2018, Milla signed a four-and-a-half-year contract with CD Tenerife in Segunda División. He made his professional debut nine days later, playing the full 90 minutes in a 0–0 home draw against Real Valladolid.

Milla scored his first professional goal on 27 October 2018, netting the equalizer in a 3–2 home win against AD Alcorcón. On 24 June 2020, he scored a brace in a 4–1 home routing of CD Mirandés.

Granada
On 31 July 2020, Milla signed a four-year contract with La Liga side Granada CF. On 12 September he marked his competitive debut for his new club and his first appearance in the top division of Spanish football by scoring a goal with a shot from the edge of the area, in a 2–0 victory over Athletic Bilbao.