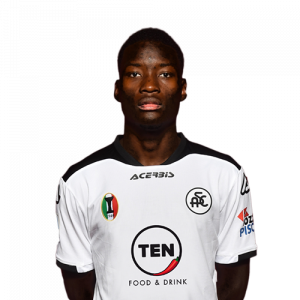 Lucien Jefferson Agoumé (born 9 February 2002) is a French footballer who plays as a midfielder for Serie A club Spezia, on loan from Inter Milan.

Sochaux
Prior to joining Sochaux, Agoumé started his career with SC Clémenceau Besançon in 2013, and signed for Racing Besançon during the 2013–14 season. He arrived at FC Sochaux-Montbéliard in 2014. He made his professional debut on 19 October 2018. Sochaux won the game against Troyes by 2–1. He became the youngest player to debut in Sochaux. During the time he was playing for the club, other clubs such as Barcelona, Inter and Lyon were watching him. Most of the time, Agoumé played as a defensive midfielder. He can also be deployed as a central midfielder and an attacking midfielder. He showed good awareness and had good pinpoint passing and innovative vision. According to Agoumé’s former head coach in Sochaux, Omar Daf, he is a player that improve in games. Before Agoumé was transferred to Inter, he has already made 15 appearances for Sochaux in Ligue 2 and one appearance in Coupe de France at the age of 17.

Inter Milan
Inter Milan completed the transfer of Agoumé on 5 July 2019, with a total transfer fee of €4.5 million including add-ons. According to the statement, Agoumé had signed a three-year deal with Inter Milan. He was playing for the club’s Primavera for the 2019–20 season. Inter Milan faced competitions from other clubs such as Barcelona and Lyon, when signing the player. According to Oscar Damiani, one of the intermediaries in the deal, Barcelona and Manchester City wanted to recruit Agoumé. According to Agoumé himself, he chose to join Inter, because the team believes a lot in him. His attributes made Inter to sign him during the summer transfer window, becoming a defensive midfielder with incredible tackle resistance. Fans compare Agoumé with Paul Pogba. Pogba has the same nationality and play the same position as Agoumé. Antonio Conte trained both of them before. So far, Agoumé has played for Inter’s Primavera in Primavera 1 for five times (450 minutes) with one goal and one assist. He has four appearances for the Inter Milan UEFA U19 in the UEFA Youth League and had two assists. Agoumé’s first appearance for Inter came in a pre-season friendly against Lugano. He made a substitute appearance and Inter finally won a 2–1. His Serie A debut came on 15 December 2019. He made a six minutes’ substitute appearance in the 1-1 match against Fiorentina.

Loan to Spezia
On 24 September 2020, Agoumé joined Spezia on a season-long loan.