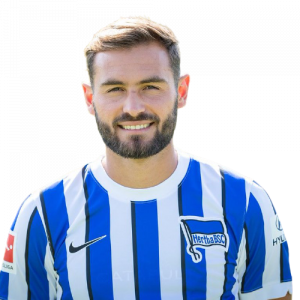 Lucas Simon Pierre Tousart (born 29 April 1997) is a French footballer who plays for Hertha BSC in the Bundesliga as a midfielder. He has also represented the France national youth teams starting from France U19.

Valenciennes
Tousart made his debut for the Ligue 2 side on 24 January 2015 against Tours. He played the whole match in a 2–1 home loss.

Lyon
Tousart made his Lyon debut on 5 December 2015 in a Ligue 1 match against Angers. He was replaced by Clement Grenier after 61 minutes in a 2–0 home loss. He scored his first professional goal on 16 February 2017 in a UEFA Europa League game against Dutch side AZ Alkmaar, scoring the first goal in an eventual 4–1 victory.

Hertha BSC
On 27 January 2020, Tousart signed with Bundesliga side Hertha BSC. He was however sent back to Lyon on loan until the end of the season. While on loan to Lyon, Tousart volleyed in the game’s only goal as Lyon shocked Juventus in the first leg of their Champions League Round of 16 tie. It was announced in June 2020 that Tousart would join Hertha on 1 July, meaning that Tousart would be unable to take part in Lyon’s postponed Champions League match following the COVID-19 pandemic.