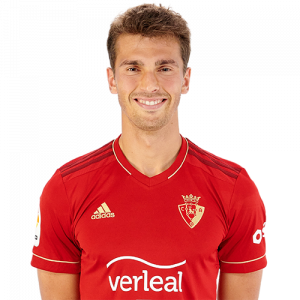 Lucas Torró Marset (born 19 July 1994) is a Spanish footballer who plays for La Liga club Osasuna as a midfielder.

Early career
Born in Cocentaina, Alicante, Valencian Community, Torró represented mainly Hércules CF and CD Alcoyano as a youth, aside from two other clubs in his native region. On 20 January 2012, while still a youth, he made his professional debut by coming on as a late substitute for Paco Esteban in a 2–2 home draw against UD Almería for the Segunda División championship. On 23 May he appeared in his second match, again from the bench in a 0–5 home loss against former club Hércules; he was also sent off during the match.

Real Madrid
In August 2012 Torró moved to Real Madrid for a fee of €100,000 with additional clauses based on his progression; it was also Alcoyano’s most profitable transfer of its history. Initially assigned to the Juvenil squad, he was promoted to the reserves midway through the season.

Real Oviedo (loan)
On 18 July 2016 Torró was loaned to Real Oviedo in the second tier, for one year.

Osasuna
The following 6 July, he signed a three-year deal with CA Osasuna after his contract with Real Madrid expired.

Return to Osasuna
On 5 August 2020, Torró returned to Osasuna in a transfer deal worth around €2 million. He signed a 4-year contract with the club.