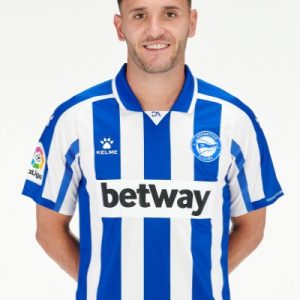 Lucas Pérez Martínez (born 10 September 1988) is a Spanish professional footballer who plays as a forward for Deportivo Alavés.

After spending the first years of his career in the lower leagues, only appearing sporadically for the first team of Rayo Vallecano in the Segunda División, he first made a name for himself with Karpaty Lviv in the Ukrainian Premier League. In 2013, he signed with PAOK from Greece, and later returned to La Liga with Deportivo, where he scored 32 goals in 93 matches.

Subsequently, he represented English clubs Arsenal and West Ham United in the Premier League, before rejoining Alavés where he had played as a youth.

In May 2019, West Ham accepted an offer from Deportivo Alavés for Peréz for a fee of €2.5m subject to a medical. He officially signed for the club on 3 June, making his league debut on 18 August by playing the last minutes of the 1–0 home victory over Levante UD. He scored his first goal on 29 September, the first in a 2–0 win against RCD Mallorca also at Mendizorrotza Stadium.

On 29 October 2019, Pérez equalised in a 1–1 home draw with Atlético Madrid, becoming the first Alavés player to score in five consecutive La Liga games since 1955. He repeated the feat the following match (at CA Osasuna, 4–2 loss), and in the process became their first player to achieve that in six consecutive fixtures. He found the net for the seventh time on 9 November against Real Valladolid, becoming the first player in the history of the competition to score in seven consecutive matches with two different teams, as he had done it before with Deportivo.