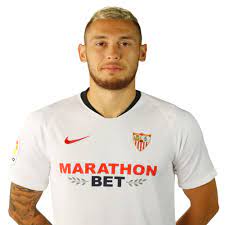 Lucas Ariel Ocampos (born 11 July 1994) is an Argentine professional footballer who plays as a winger for Spanish club Sevilla and the Argentina national team.

Ocampos began his senior career in Argentina with River Plate before joining Monaco for a Ligue 2 record fee of €11 million in 2012. He spent two-and-a-half seasons in the principality and was nominated for the European Golden Boy award before joining Marseille. There, he spent four seasons, either side of loan spells in Italy with Genoa and Milan, before joining Sevilla in 2019.

Sevilla
On 3 July 2019, Ocampos signed a five-year contract with La Liga side Sevilla for an undisclosed fee. On 11 August 2020, he scored the winning goal for Sevilla in the 88th minute, in a 1–0 win against Wolverhampton Wanderers in the 2019–20 UEFA Europa League quarter-finals. In his debut season with Sevilla, Ocampos scored 14 goals in La Liga to finish 4th in the table, and eventually won the Europa League. On 24 September 2020, he scored from a penalty in 1–2 defeat against Bayern Munich in the 2020 UEFA Super Cup.