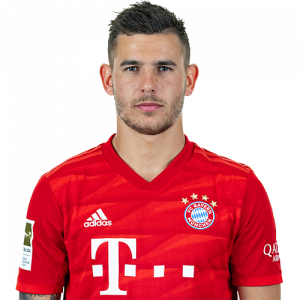 Lucas François Bernard Hernandez (born 14 February 1996) is a French professional footballer who plays as a left back or centre back for Bundesliga club Bayern Munich and the France national team.

Hernandez started his career with Atlético Madrid where he made more than 100 competitive appearances, reaching the 2016 UEFA Champions League Final. He also won the 2018 Europa League and the Super Cup in the same year. He signed for Bayern in 2019, winning the Bundesliga, DFB-Pokal and Champions League in his first season as part of a treble. A French international since 2018, Hernandez was part of the winning squad at the 2018 World Cup.

On 27 March 2019, Bayern Munich announced that Hernandez would join the club on 1 July 2019 for a club record (and Bundesliga record) fee of €80 million, signing a five-year contract lasting until 2024. He made his debut for Bayern on 10 August in a first round match against Energie Cottbus in the DFB-Pokal as an 89th-minute substitute. On 23 August 2020, along with his Bayern Munich teammates, Hernandez became a Champions League winner.

On 3 November 2020, Hernandez scored his first goal for Bayern Munich in a 6–2 away win over Red Bull Salzburg in the 2020–21 UEFA Champions League.