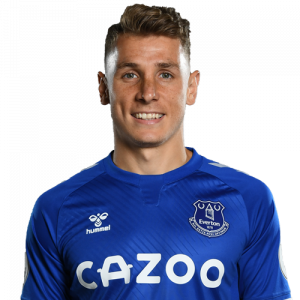 Lucas Digne (born 20 July 1993) is a French professional footballer who plays as a left-back for Premier League club Everton and the France national team.

Digne began his career at Lille before joining Paris Saint-Germain in 2013. After spending a season on loan at Roma, he moved to Barcelona in July 2016. Despite not playing regularly at either club, he won 12 honours at Paris and Barcelona combined. He joined Everton in August 2018.

He won the 2013 World Cup with France under-20, and made his senior international debut in March 2014. He represented France at the 2014 FIFA World Cup and was a member of their squad for UEFA Euro 2016, where his nation reached the final.

Digne joined English club Everton on 1 August 2018, for a five-year deal on an initial fee of £18 million. He made his debut ten days later, replacing double goalscorer and fellow debutant Richarlison for the last four minutes of a 2–2 draw at Wolverhampton Wanderers. On his first start on 29 August in a 3–1 EFL Cup win against Rotherham United, he assisted a goal from Dominic Calvert-Lewin. Digne made his first Premier League start for Everton four days later in a home game against Huddersfield Town, and assisted Dominic Calvert-Lewin’s headed equaliser in a 1–1 draw.

By the start of October, Digne had become Everton’s first-choice left back, ahead of veteran Leighton Baines. He scored his first goal for the club on 10 December, in the sixth minute of stoppage time at the end of a match against Watford, curling in a free kick for a 2–2 draw. Sixteen days later he scored twice in a 5–1 win at Burnley, with a free kick and a 30-yard shot. On 29 January 2019 he was sent off in a 1–0 win at Huddersfield for denying Adama Diakhaby a goalscoring opportunity with a foul. Digne’s first season at Everton concluded with individual honours as he was named the Club’s Player of the Season, as voted for by supporters, and Players’ Player of the Season alongside midfielder Idrissa Gana Gueye, the first time the award had been shared.