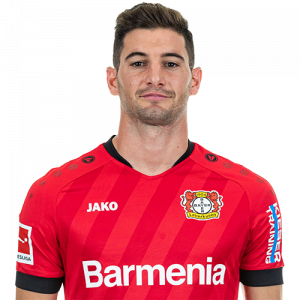 Lucas Nicolás Alario (born 8 October 1992) is an Argentine footballer who plays as a striker for German club Bayer Leverkusen and the Argentina national football team.

Colón
Born in Tostado, Santa Fe, Alario began his career at Colón in his native province. He made his Argentine Primera División debut on 11 June 2011, as a 59th-minute substitute for Cristian Raúl Ledesma in a 0–1 home defeat to Arsenal. His first goal for the club came on 22 March 2014, a fourth-minute penalty for the only goal of a win against Tigre at the Estadio Brigadier General Estanislao López. On 12 May 2015, he netted twice in a 3–2 away win at Defensa y Justicia for Colón’s first away win of the season.

River Plate
On 26 June 2015, Alario became River Plate’s fourth signing of the season, joining the Buenos Aires-based club on a four-year contract for a fee of 2.25 million US Dollars. He made his debut on 11 July, replacing Fernando Cavenaghi for the final 30 minutes of a 1–1 home draw against Temperley. Eleven days later, as a substitute, he equalised for a 1–1 draw away to Paraguay’s Club Guaraní in the second leg of the Copa Libertadores semi-finals, converting a pass from Tabaré Viúdez to send River through 3–1 on aggregate to their first such finals since 1996. On 5 August, in the second leg of the final after a goalless first, he finished Leonel Vangioni’s cross at the end of the first half to open the scoring as his team won 3–0 against Tigres UANL.