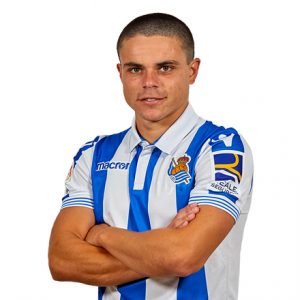 Luca Sangalli Fuentes (born 10 February 1995) is a Spanish professional footballer who plays for Real Sociedad as an attacking midfielder.

Born in San Sebastián, Gipuzkoa, Basque Country, Sangalli represented hometown club Real Sociedad as a youth, (appearing in the UEFA Youth League in 2013). He was promoted to the reserves on 23 June 2014, and made his senior debut on 5 October by coming on as a late substitute for Eneko Capilla in a 1–1 Segunda División B away draw against CD Toledo.

On 14 August 2018, Sangalli was definitely promoted to the main squad in La Liga and extended his contract until 2020. He made his debut in the category on 31 August, starting in a 2–1 away loss against SD Eibar.

On 5 October 2018, Sangalli scored his first professional goal, netting his team’s second in a 3–1 away win against Athletic Bilbao in the Basque derby. At the end of the month, the 23-year-old suffered a minor stroke. He returned to action the following January against RCD Espanyol, and was given an ovation as he left the pitch.